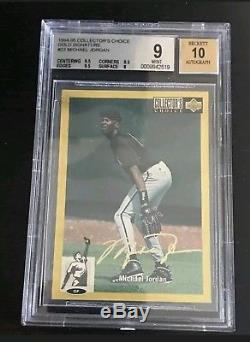 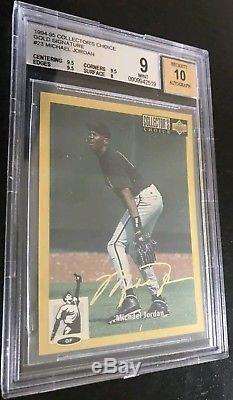 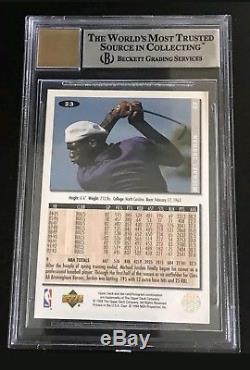 Great information about the history of the card. Feel free to message me and make a serious offer. Up for sale is a very rare card that I believe to be a 1 of 1. I have researched back every way I know how....

Pop report says there only a few in existence to begin with... I assume the reason there are none available for sale is because those few are in private (serious) collections.

If you want a card no one has.... Beckett themselves even made an error!! The autograph surface and placement is done so well that they gave it an auto Pristine Gem 10 grade!

This card was even featured in an article outlining it's rare-air-ness! In 1994 Upper Deck launched a new collection called their "Collector's Choice". They produced several Michael Jordan cards between the series 1 and 2 sets. This is the, without question, the rarest I see come on the market. This #23 was the first one they produced and is when he was playing baseball and not basketball. Upper Deck had planned for a few MJ release cards early and some late. The issue is the that they couldn't feature Jordan as basketball in the early 2 so they made one of him playing baseball and this one of him playing golf (his other big love). I, recently, came across a very interesting article from an author that did an article on how hard it is to find this parallel card... The odds of doing so... And the cost Patrick Greenough wrote : I havent done a statistical breakdown in a while so I figured this rainbow would make for a strong entry. Were talking about Michael Jordan 1994-95 Collectors Choice #23. Ive featured cards with MJ in a Sox jersey before and I guess you can say Im a fan. It wasnt until only recently that I discovered that this was actually a basketball release. I always thought that this card came out of 1994 Collectors Choice baseball.

Makes since if you look at it from a logical standpoint. MJ in a baseball uniform, must be from a baseball product. I suppose the contrary fact slipped right by me for all these years. That little anecdote partially influenced my decision to write about this particular release for todays entry. So lets get down to it, the statistical analysis for the base card and its paralleled silver and gold counterparts.

This info is pretty darn important so be sure to take note. The 94-95 Collectors Choice basketball set is made up of 420 cards. Each pack contains 12 cards. That means you have a 1/35 chance of pulling the base MJ card, that is of course assuming every pack contains different cards than the pack before i. Yea, right, like thatll ever happen with that many packs!

Given the strong potential for doubles, lets assume a mean of 35 packs with a standard deviation of 5 (give or take). So that puts us at 40 packs if assuming the probability for pulling doubles. So technically, the odds of pulling the base MJ are roughly one per box.

This is great news for buyers with expectations! Silver: 1:12 boxes This card is somewhat more difficult to obtain.

According to Beckett, the odds of pulling a Silver parallel are 1/pack. Gold: 1:409 boxes This is where things get strange and a little tricky. Beckett states that the odds of pulling a Gold parallel are 1/35 packs. No big deal, thats at least one a box, same as the base right! This difference is that the base was one MJ/box, for this Gold parallel, its 1/box but could be anyone.

Tough is a very weak statement. If you find one, be prepared to utilize your haggling skills as this card still demands attention, even this many years later. Its gonna cost you some bucks but dont say I didnt warn you!

Best of luck on your hunt My final Thoughts...... This author above used VERY conservative numbers for market cost of a box and individual packs... Upon doing some research, with current market pricing, on unopened boxes.... I expect that the person that buys this card will make it like the handful of the other ones in existence...

Locked away in a private collection and not ever offered for sale again... I have other MJ rare inserts and other cards from my collection that I post from time to time... So check back with me. Be sure to check out my other listings!

I have some amazing deals that I will make folks that are repeat buyers. Have a lot of repeat/happy/loyal buyers! See my 100% perfect feedback comments! This is esp huge on some of my lesser expensive listings too!

The seller is "blown01vert" and is located in Chesapeake, Virginia. This item can be shipped worldwide.